From the Desk of Steve Lounsberry…on Mirroring 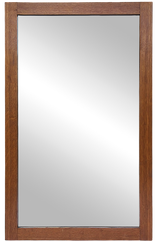 If you could increase your results by over 50% with one simple focus, would you?

Imagine I told you the tool was a mirror.

Some would be offended inferring an insult to their appearance. Others might be annoyed, believing this is another “stand in front of your mirror and repeat this mantra to unlock your destiny” bit.

This is neither of those.

Unlike the examples above, the focus is not you, it is “the other.” Imagine you are the mirror, standing in front of your client, business partner, spouse, friend or child. You reflect, or mirror, their emotion, physicality, and speech. This may seem strange at first.  The “magic” lies in successfully shifting 100% of your focus to “the other”.

Italian researchers first discovered these mirror neurons in the 1990s in Parma.  It was when the research assistant was eating gelato!  They first found that brain synapses fire both when an animal acts and when the animal observes the same action performed by another.  Listen to this NPR podcast for more details.

As a science, the study of mirror neurons is relatively new and still evolving. For now, this kind of mirroring alignment fosters closeness and trust, and can be beneficial in any environment in which collaboration is preferred to opposition.

The land mine to avoid, however, is manipulation. Deliberate use of mirroring without being truly engaged with “the other” will backfire. As human beings, we despise being manipulated, but we highly value being empathized with and understood. Sales trainer David Hoffeld says mirroring another person’s body language helps him focus on the person’s needs and understand his viewpoint. “It’s not something you do to someone. It’s something you do with someone,” says Mr. Hoffeld, author of “The Science of Selling.” He adds, “The very process of mirroring will help you keep your focus where it should be, on the other person.”

If you could negotiate your human interactions 50% more successfully by applying this mirroring technique, would you take the chance?

Give it shot! And please let us know what you learn along the way.

Adapting Rituals in a Time Where Change is Inevitable
June 9, 2020